THE COMPREHENSIVE GUIDE TO ANXIETY/DEPRESSION

Sitting in the parking lot at the grocery store, your heart is racing. Cold sweat beads up on your forehead and it suddenly feels like you can’t catch your breath. Your list clenched in one hand and your car keys in the other, you can’t seem to bring yourself to open the car door and face the world that awaits. Nauseous, your hand is frozen above the handle as you wonder if this is what a heart attack feels like.

Or sitting around the dinner table with your family you feel… nothing. Having dinner together has always been a touch point in your day, something you looked forward to. Now it just seems like work. You spend time preparing a meal but instead of finding peace in the rhythmic chopping and stirring, you wish you could skip ahead to the part where you get to go to bed. In fact, you don’t have the energy for anything anymore. It feels like you are going through the motions of your life with no end in sight.

If any part of these scenarios sounds familiar, you may be one of five Americans who is impacted by a mental illness at some point in their life. Anxiety (the first scenario) and depression (the second scenario) are among the most common mental health challenges people experience in this country. Yet only 41 percent of adults with a mental health condition receive treatment. This is due, in large part, to a misunderstanding of what anxiety and depression are, how they feel, and how we perceive these conditions as a society. 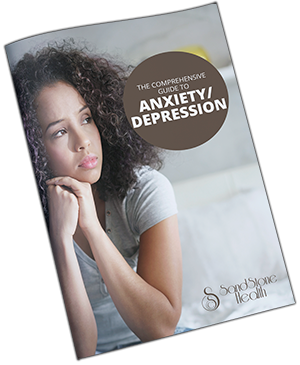 Download our Comprehensive Guide to Anxiety and Depression in an Ebook

Take a PDF version of this article “to go” and read it at your convenience. 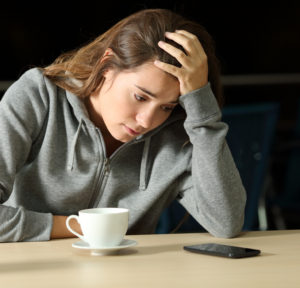 The human body is equipped with a remarkable mechanism called the “fight or flight” response. This evolutionary tool acts as a protectant against people, animals, or things that would do us harm. When faced with imminent danger, our brain signals the adrenal glands to release large amounts of hormones that prepare us to either run from the danger or fight it head-on. It may be a temporary “moment of panic” when you think you locked your keys in the car or a more serious surge of adrenaline when a large, angry dog chases you on your morning run.

Everyone feels anxious from time to time. The night before your wedding, the day of a big test or the morning of a big work presentation is often accompanied by anxiety. But when you feel uncontrollable, overwhelming, persistent, or irrational dread of everyday situations, you may have an anxiety disorder. Anxiety disorders can be disabling, often interfering with the most basic of everyday activities. Anxiety disorders are the most common mental illness in America, affecting 18 percent of the population.

Anxiety is characterized by certain symptoms:

While there are certain common symptoms that accompany anxiety, there are several different types of anxiety disorders you can experience.

There is no single cause of an anxiety disorder. Instead, people who experience overwhelming anxiety often do so because of a combination of factors. Genetics play a part. If you have a first-order relative (mother, father, brother, or sister) who experiences anxiety disorders, you are more likely to have one too. Your brain chemistry affects how you experience the world around you. Neurotransmitters are chemicals that allow synapses (the brain’s wiring) to work properly. An imbalance in your brain chemistry can cause symptoms of anxiety, even when you know your feelings are irrational. Trauma, abuse, violence, or other environmental factors may also lead to anxiety disorders.

How is anxiety treated?

Most often, anxiety is treated with a combination of cognitive behavioral therapy and medication. Cognitive behavioral therapy involves learning how to manage worry and anxiety through talk. Therapists often teach patients how to engage in soothing self-talk or manage their physical symptoms. But behavioral therapy only teaches someone how to deal with their anxiety. It does not address the underlying neurological causes. Likewise, medications often change the way the brain’s neurotransmitters are received, but it does not address the underlying physiological problem.

Neurofeedback, the process of training the brain to accurately receive and process information, is the only way to treat the fundamental cause of a person’s anxiety. Using feedback from an external, non-invasive EEG machine, patients play a game or watch a video while retraining their brain to receive stimuli without triggering the fight or flight response. Many neurofeedback patients report their anxiety diminishing in just a few treatments as their brain begins to process information the way it should.

Anxiety in all of its forms and depression often go hand in hand. Nearly half of all people who are diagnosed with an anxiety disorder are also diagnosed with depression. In fact, research is moving toward accepting the idea that anxiety and depression are not two distinct mental illnesses, but rather two sides to the same coin. The two disorders share the same genetics and neurobiology as well as the same environmental vulnerability. If someone reacts to stressors with anxiety, they are also likely to experience depression.

Not only is depression the leading cause of disability in the US among people age 15-44, costing $215 billion in lost wages, but two-thirds of people with depression also do not seek treatment. This is largely because they do not recognize the signs and symptoms of depression.

How do I know if I have depression? 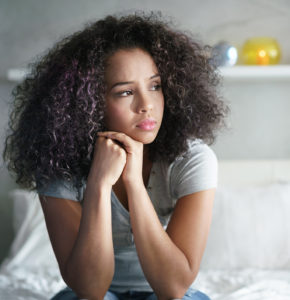 Feelings of sadness, loneliness or fear from time to time are normal conditions of loss, stress or difficult situations in our lives. When these feelings persist, when they become debilitating or when they are severe, you may be diagnosed with depression.

Depression symptoms are often different for men than they are for women, though women tend to experience depression more than men.

For men depression symptoms often include:

For women depression symptoms often include:

Both men and women tend to experience:

Major Depressive Disorder (MDD) is the most commonly diagnosed form of depression affecting more than 16 million Americans each year. There are several diagnostic criteria for MDD, but a person is said to have the condition if they experience five of the following symptoms for two or more weeks:

Persistent depressive disorder is characterized by a sad, dark mood that is present for most of the day for at least two years (one year in children and adolescents). People who have persistent depressive disorder also usually have a poor appetite or overeat, insomnia or hypersomnia (sleeping too much) fatigue, low self-esteem, problems making decisions, hopelessness, or difficulty concentrating. But, these symptoms are not as severe as they are with a Major Depressive Disorder.

Post-Traumatic Stress Disorder (PTSD) is a potentially debilitating condition in people who have experienced a traumatic event. While the rate of PTSD among veterans is 15 times higher than that of the civilian population, anyone can experience PTSD after trauma. While a diagnosis can only be made if symptoms persist for more than one month, PTSD often does not show up immediately after an incident. Instead, it can happen months or even years later. Symptoms include re-experiencing the event through flashbacks or nightmares, emotional numbness or avoidance of anything that reminds you of the trauma and hyperarousal (difficulty sleeping, feeling agitated, getting angry easily).

How is depression treated?

Most often depression is treated with a combination of medication and psychotherapy. Antidepressant medications are often prescribed as soon as a person is diagnosed with a depressive disorder. Typically, they take two to four weeks before they impact the symptoms and many times it takes trying different medications in different dosages before the “right” combination is found. Even then, antidepressants may cause side effects like weight gain, sexual dysfunction, and thoughts of suicide.

Psychotherapy, including cognitive behavioral therapy (CBT) and interpersonal therapy, are aimed at improving your relationships with yourself and other people. CBT is based on the idea that if you can change your negative view of yourself, your future and the world around you, you can relieve symptoms associated with depression. Focusing on helping patients identify and modify their thinking and behavior patterns also helps people manage their depression in both the short- and long-term. Interpersonal therapy takes aim at improving the quality of a person’s relationship relationships with other people in an effort to eliminate depression symptoms.

While the combination of medication and psychotherapy is the most common way to treat depression, it is not always effective. Instead, both therapies aim to help a person manage their symptoms rather than cure their depression. Depression has its root in the way the brain processes information. Medication changes the level of neurotransmitter chemicals in the brain while psychotherapy gives a person emotional coping mechanisms. Neither address the brain’s physiological response to stimuli.

If you were to look at the brain scans of people with neurological disorders, including depression, you would see abnormal brain waves at certain points in time. Neurofeedback works through operant conditioning to bring brain waves back to normal levels, easing feelings of hopelessness, disinterest, anger, and guilt. Best of all, the process is safe, effective, non-invasive and does not pose any risks or side effects. A sensor cap that detects brain waves is applied to the outside of a person’s head. They are then instructed to play a game or watch a movie. When abnormal brain waves occur, a visual cue flashes on the screen causing the brain to return to normal. In a few short sessions, symptoms begin to lift. Once a treatment plan is complete, a person can expect to remain depression free for months or even years.

The social stigma of mental illness  Most people who experience anxiety will never seek treatment for it. This is due, in part, to the social perception of mental illness. We often feel that someone who experiences a mental health problem must be “crazy” or somehow fundamentally flawed, weak or broken. Even people who believe treatment for anxiety and depression is necessary often won’t accept help for themselves. After all, if they are still functioning, they must be fine, right?

In reality, most people who seek treatment for depression or anxiety begin seeing an improvement in less than six weeks. Many regret not making the call much sooner. If you or a loved one is suffering from depression or anxiety, call Sandstone to find out how neurofeedback can get you on the road to real recovery.